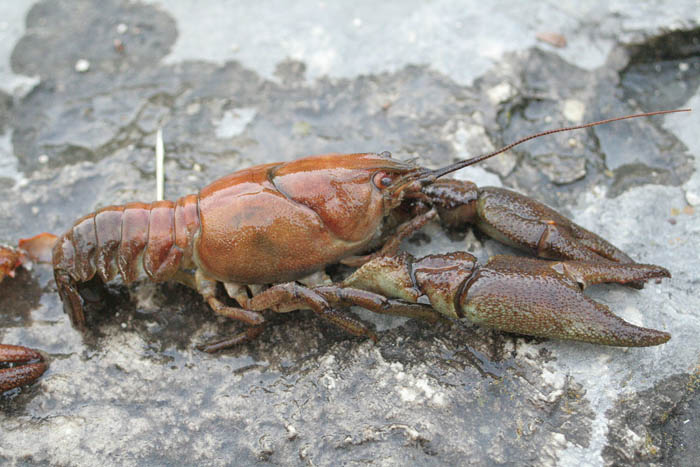 In a welcome piece of news, rangers working in Ecclesall Woods have discovered a population of white-clawed crayfish living in the Limb Brook. This elusive crayfish, which is on the global IUCN Red List of Threatened Species, has undergone serious decline in the UK due to competition with the introduced North American signal crayfish.

During the 1970s the UK government began farming the signal crayfish in British waters to export to the Scandinavian market. This venture was ill advised because the signal crayfish soon escaped from commercial fisheries. As carriers of crayfish plague they soon infected the native white-claw, which has little natural resistance. Those white-claws that did not succumb to disease found themselves forced out of their habitat and competing for food with the North American species.

It had been thought that the white-clawed crayfish had gone locally extinct in the Woods, with a few populations hanging on elsewhere in Sheffield. So it was a wonderful surprise to find any in the Limb Brook. They will be carefully watched over to ensure that they continue to thrive. Picture credit: © David Gerke / Wikimedia Commons

If you want to learn more about the white-clawed crayfish then visit the Wildlife Trust’s page dedicated to them.